Jill Holder is an artist living and working in the south east of England.  Brought up during the austerity following World War II she learnt to amuse herself with the things she found around her – A discarded matchbox, pebbles, scraps of paper, beads etc.  Her favourite Christmas present ever was given to her by her father when she was 13.  It consisted of a box full of odd bits of mirror, cogs, a small engine, tiny light bulbs, bits of wire, and more.

Following school, she joined the foundation course at Croydon College of Art where she was lucky enough to study under Clive Barker and Bruce McLean.  Then, as family pressure insisted, she studied “something worthwhile” choosing Fashion at St Martin’s in London.

She worked in fashion, interiors, even floristry, before giving up everything to concentrate on her work as an artist.

She is still doing what she did as a child. She says “Primarily, I make things.  With paint, paper, clay, found objects and glue and anything else that stays still long enough.  I also like interfacing with the public through my work.  So often a chance remark about a piece of my work will start a whole new chain of thought.”

In “Open the Box” in 2012, (Creek Creative, Faversham) she did just this.  One hundred boxes filled with treasures each set, closed, on a shelf for the viewer to open and explore.

In 2014, interested in the human passion for collecting, she enjoyed collaborating with fellow artist Bob Lamoon as part of Holder and Lamoon. Their show, “The Essence of Memory”, following their Artist’s Residency at the Beaney House of Art and Knowledge, Canterbury, was packed with comments and thoughts about the subject, all packaged in an odd juxtaposition of boot market finds, painting and sculpture.  Both scholarly and humorous the show delighted visitors.

In 2015 she was involved in an artist led show “A Handful of Dust”  (Pie Factory, Margate), a hard hitting collection of new work by eight artists who wanted to raise awareness of the hundreds of thousands of children caught up in the adult world of war.  This has set a precedent for more serious work from this artist on a subject that still occupies her thoughts.  “For me,” she says “there is no glory, nothing to wave flags about, only destruction and decay.  Caught in the middle of every conflict are children. Children. They are starving through associated famine, losing limb or life in attacks, losing their families and their security, losing their innocence and grace as they are taught to use weapons to kill.”

There have been other exhibitions in between but recently Jill has been concentrating on family affairs.  Although she has only taken part in shows in a small way she has built a new studio, continued with her practice and is now turning her thoughts towards exhibiting again. 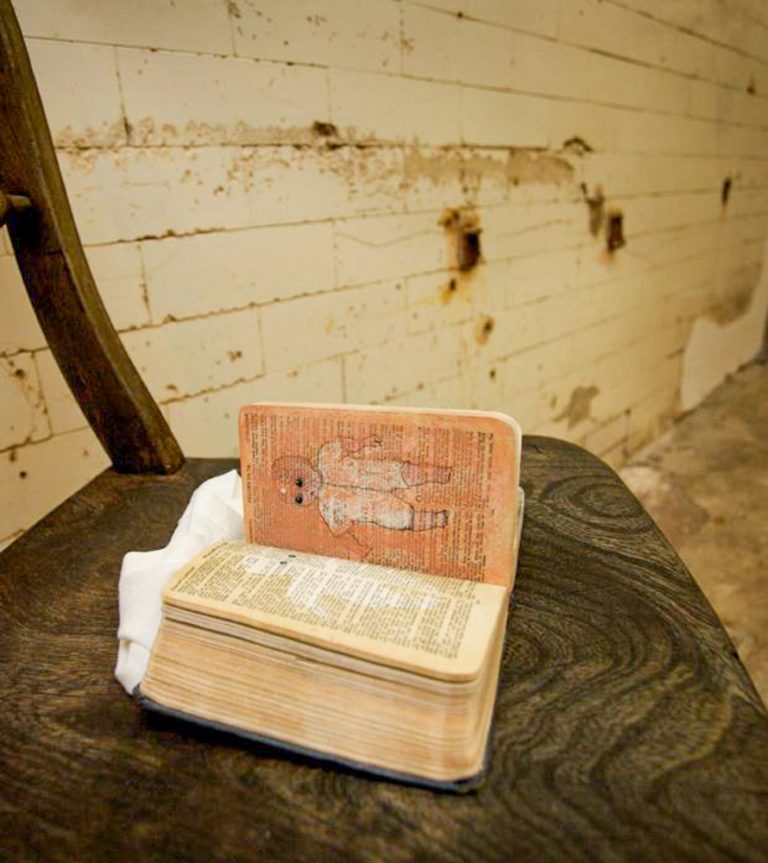 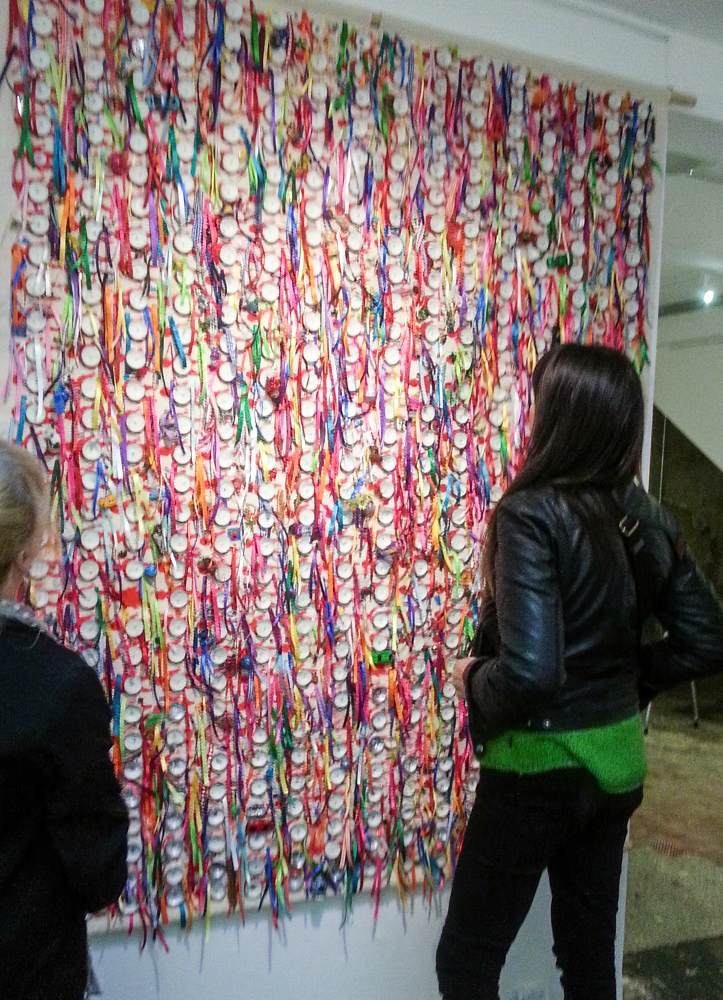 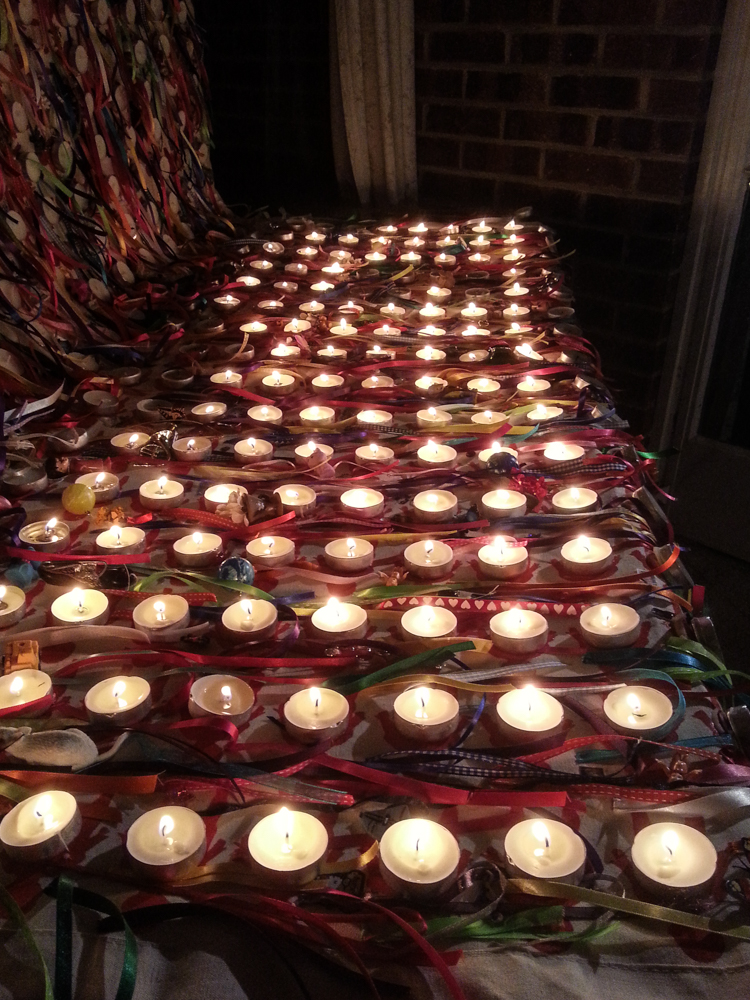 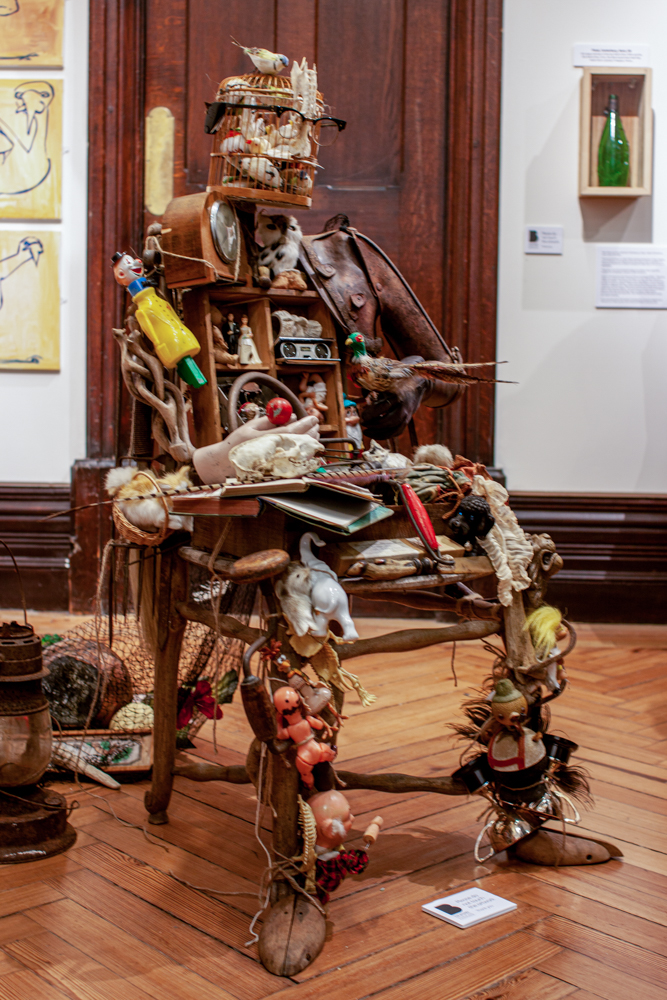 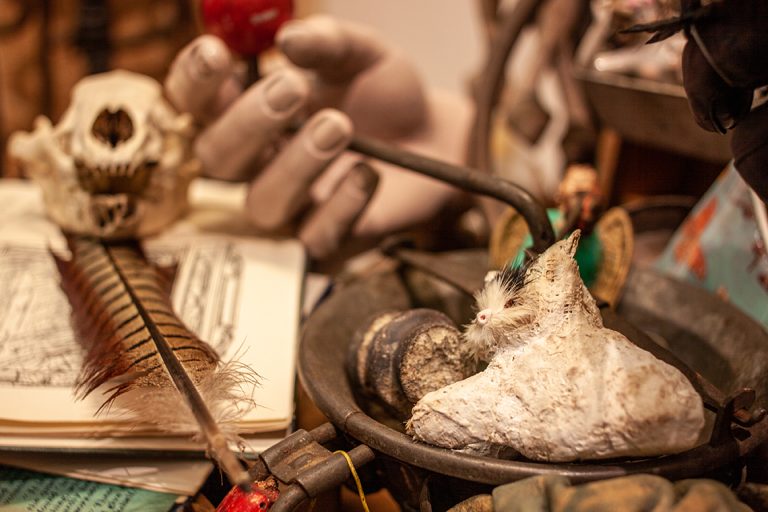 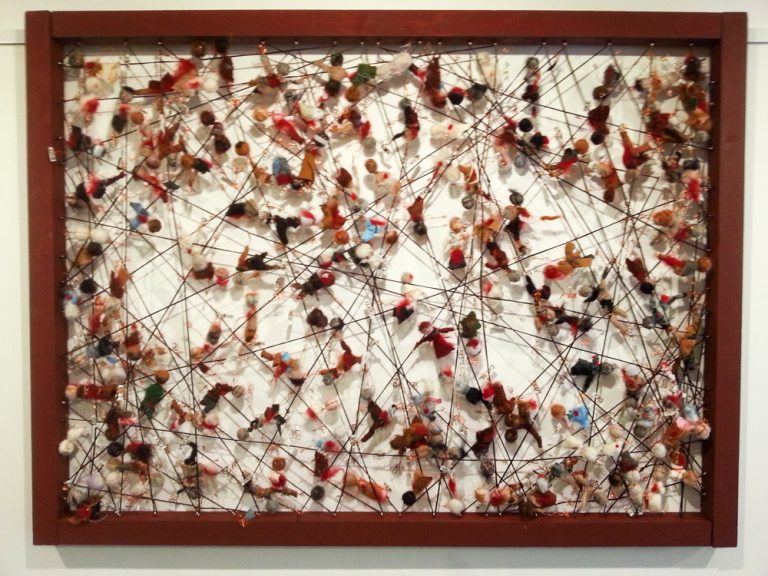 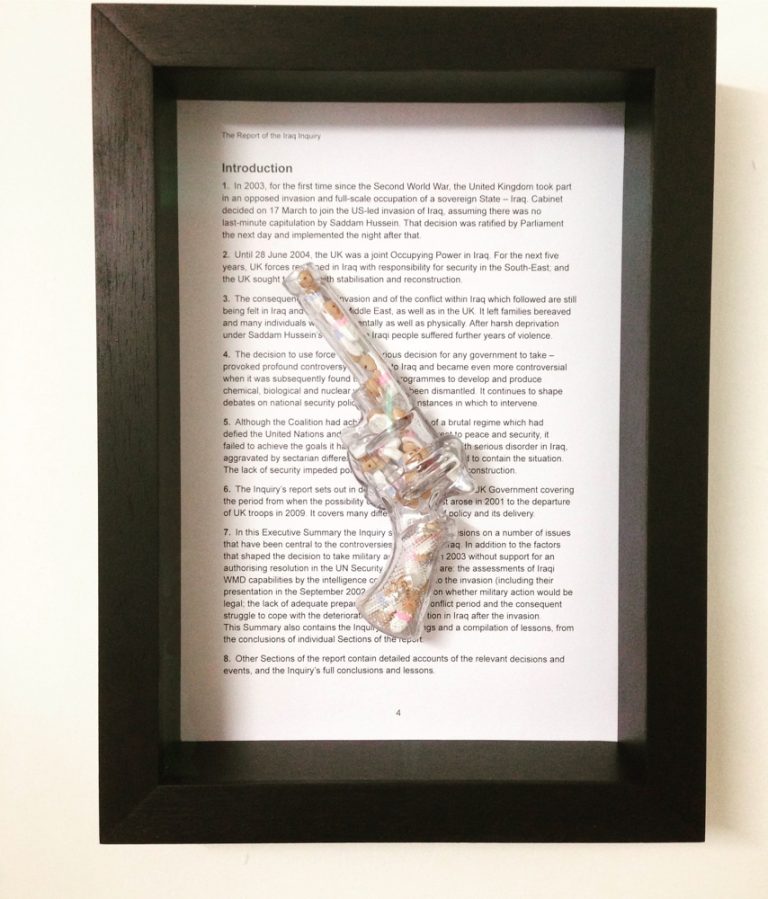 Describe what you do as a creative.
What do I do? I stick stuff together. And more. My work gathers created or found items into a whole.

Tell us briefly about yourself so we understand where you come from. What’s your family background?
My family was, and is, non-creative. As art is my way of trying to communicate, you can guess how well that went.
Childhood memories of making art were drawing in the diaries we kept at primary school when I was supposed to be writing. Making homes for gnomes by the pond in the garden. Playing with the offcuts and curly shavings of timber on the shed floor from my father’s DIY efforts. I was fascinated by my mother’s copy of Edward Lear’s illustrated nonsense poems.

Can you remember your earliest experience with art?
I was always making -- being lonely and making.

How did you begin doing what you do? How did it all start?
I started making art as art in my teens, exploring shapes by bending, cutting and folding paper and card. It was hard to get into my bedroom with the walls and ceiling draped with the results of this, and the floor was covered with drawings and paintings.
The way I work remains hugely influenced by my first boyfriend in the mid-1960s. He was an avid collector of miscellaneous weird ephemera, much of it Victorian and Edwardian, from the embryonic charity shops of the time where one rarely spent more than an old penny but often ran into people such as Paul McCartney. My friend would spend hours arranging his finds and taught me to do the same, watching for juxtapositions and similarities that would underline or change meaning. Other influences included Joan Miró and later the pop artists, in particular Clive Barker and Peter Blake, although I am more interested in people and their relationships, hopes and fears than the contemporary semiotics of Pop.

What turns on your creativity? What triggers your need to create and to make art?
I make art because I have to. The act of being able to share it and discuss it is a bonus. Inspiration ranges from following on from my last pieces to music, poetry, an overheard comment or perhaps an item of world news I cannot get out of my head.

When were you most satisfied in your work? What is your golden moment so far?
In my exhibition ‘Open the Box’, a visitor wept on seeing my work Linen Chest. This was a chest altered to include rows of tiny white garments on lines that pulled up as the lid was opened. I had been thinking of the virgin, unused things saved for marriage – a bride’s bottom drawer. It turned out that the work reminded this lady of the joyous celebrations following VE Day. She and her neighbours had nothing to use as decorations for their street party, so they hung all their old underwear across the way. They celebrated under festoons of corsets, bloomers, long johns, linen, cotton and lace, yellowed and worn, glorious in their defiance. This was not how I had seen the work. Yet her vision was valid. We all make sense of the world in our own ways through our own lenses of experience and personality. It is always an honour to reach someone on such a deep level.

What is the most exciting part of your work at the moment?
I like to work in ‘clumps’ that usually present as entire shows, so it is always the current project that excites me the most. I am currently working on a large piece which has meant me paying minute attention to world news, and for which I have been making a small part every day since the beginning of February 2022. It won’t end this January – there is a great deal of work involved in getting it ready. Watching the news has been miserable, and sometimes I have wanted to stop, but it seems important.

What is your dream project?
My dream project will reveal itself when the time is right. But I need help and space and funds to do it, so...it remains a dream. For now.